"Direct Effects of an Invasive buckthorn Metabolite on Amphibian Embryo Survival and Development."

Most  people know Dr. Sacerdote-Velat as one of the leading authorities on Green Snakes but did you know she is one of the foremost authorities on buckthorn?  Please join us for this most informative talk on Prospect Height's public enemy # 1, buckthorn!

The NRC receives more calls and questions about invasive buckthorn than anything else. We invite residents to zoom in and learn first hand just how bad this guy is and why we all want to remove it!

Nature Speaks is free admission but registration is necessary.

The Library will send you a Zoom link as the even approaches.

Dr. Allison Sacerdote-Velat is the Curator of Herpetology at Chicago Academy of Sciences/Peggy Notebaert Nature Museum, conducting conservation research focused on local reptiles and amphibians like the smooth greensnake and wood frog.

European buckthorn (Rhamnus cathartica), exhibits aggressive growth in amphibian breeding sites and releases the secondary metabolite, emodin, into soil and water. Emodin is known to have several deleterious, bioactive properties in mammals and birds, but its effects on amphibians had not been previously assessed.

Through use of the FETAX (Frog Embryo Teratogenesis Assay–Xenopus) protocol with a model organism, Xenopus laevis, the African Clawed Frog,  and a modification of the protocol with eggs of our native chorus frog, Pseudacris maculata,  we assessed the effect of emodin on amphibian development. We quantified emodin concentrations in buckthorn-invaded breeding ponds and surrounding uplands that had experienced recent declines in amphibian diversity and abundance, and examined the effects of emodin on amphibian development. 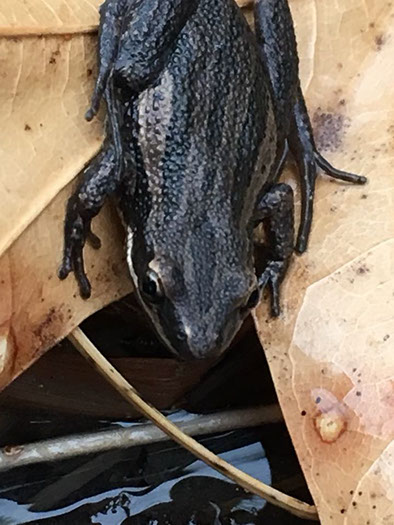 The X. laevis assay demonstrated significant embryo mortality and malformation in the presence of a gradient of concentrations of emodin including those detected in the environment. The P. maculata assay produced similar patterns of embryo mortality and malformation, however, they were more sensitive to emodin than X. laevis. Such effects may contribute to amphibian declines through depressed hatching success and poor larval survival, and may represent an unrecognized impact of invasive plants more generally.

Chorus frog on a leaf